Why Don't Progressive Churches Do Evangelism?

One of the oddest ironies of contemporary Christianity in America is the inability-- or unwillingness-- of progressive churches to evangelize.

These are the churches with the most excellent values of inclusiveness and empowerment. It is axiomatic that openness of heart and mind to all people is a principle ingredient to congregational growth.

But, it is precisely these churches that are not only not increasing in membership but are actually in clear decline.

The core enterprise of original Christianity was to extend to the world an invitation to gather together in a New Community of Love.

It was the kerygma of that euanggelion around which the first disciples came together: the life, ministry, death, resurrection, and return of Christ. The very nature of news calls for it to be disseminated and announced. The very purpose of this news is to create something “new,” that is, the community of crucified and resurrected persons called the Church of Jesus.

The word we translate “evangelism” was initially used to herald the coming visit of Roman ruler to a far-flung province. The church, subversive movement that it was, co-opted that secular term to convey the arrival of the only true King, and the establishment of the only exhaustive and eternal kingdom. The concept at the point of its inception connoted a town crier, a communal notice, an open announcement, a public address.

There are old arguments for why progressive churches aren't evangelistic:

1.) Evangelism has been done so coercively and inauthentically by the fundamentalists, that progressives want little to do with it.
2.) Progressive churches have a style and methodology-- liturgical worship, scholarly Scripture study, etc.-- that do not appeal to the zeitgeist of of our day.
3.) Faith is an intensely private matter that is not properly addressed in public ways. Evangelism requires a necessary intrusion into this privacy.
4.) Demographic forces have adversely affected the progressive churches of our cities more than the conservative churches of our suburbs. "Red state/blue state" now means "red church/ blue church."

These strike me as tired dichotomies that are increasingly irrelevant. First, we no longer have a "Christ-haunted" culture, as Flannery O'Conner described the South of her day with its slam-bang, hard-boiled religious fervor. Second, it is precisely the historic, rich traditionism and symbolism that is increasingly attractive to emerging generations. Third, the old public/private divide is all but erased in our day of Oprah and reality TV. Fourth, it seems the election of President Obama reflects a growing dissatisfaction with the polarization of our hyper-sorted national community. Furthermore, economic dynamics are bringing families back into the centers of our cities and away from the sprawling suburbs.

So, why can't churches like ours be evangelistic? Is there some other reason?
Posted by Charlie Johnson at 7:16 AM 12 comments:

We offered this opening prayer in our worship on Sunday at Broadway Baptist Church:

O Lord, we come before you today to celebrate you in spirit and truth. But, just because we want to do that does not mean it will automatically happen. Help us, God. Guide our worship. Let the words of our mouths and the meditations of our hearts be acceptable in your sight.

We bring prayers before you today especially for our nation. We have sinned. We ask forgiveness for our pride, arrogance, naivete, materialism, idolatry and injustice.

Turn our hearts toward you, O God. We lift our nation up to you love and peace.

Keep us and all the nations of the world in your protection and peace.

Through Jesus Christ-- King of all kings, Ruler of all rulers, Lord of all lords-- who lives and reigns with you and with the Holy Spirit, one God, now and forever.

Yesterday gave me a view of the ranch I haven't yet seen.

My friend James Adyelotte, faithful Broadway member and winsome metereologist for the NBC affiliate in Dallas/Fort Worth, flew me around greater Desdemona in his Cessna Cardinal. 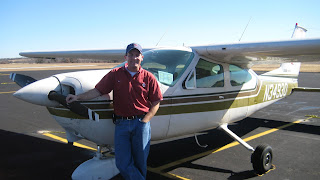 James is a delightful spirit, quick with laughter but engaging in serious matters of faith also. For him, flying has a spiritual dimension, and he took it up several years ago as a step of courage at a difficult juncture in his personal life.

We met at the small airport in Stephenville, 25 miles east of our home, and in no time we were up in the air heading back west toward Desdemona. 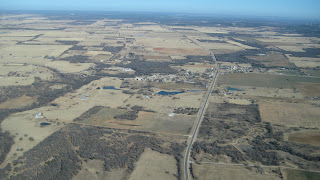 Take off and landing got my attention, but the flight itself was smooth and relaxing. It was brilliantly clear weather, perfect for flying.

Jana informed me that she had taken out a million dollar policy on me just in case. Nothing like the reassurance of a devoted wife. 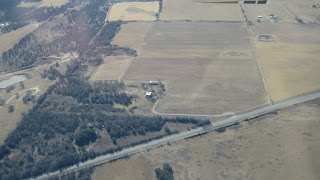 So interesting seeing the ranch from the air. To look at the land panoramically, as a comprehensive whole, undemarcated in vision by road or fence or physical feature, plants a different topographical perspective in the mind. It is an impression of smallness, yet a significant smallness, and the critical need for stewardship of that particular small ground. 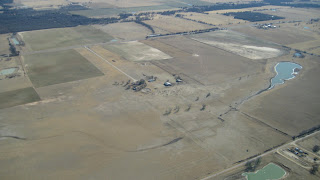 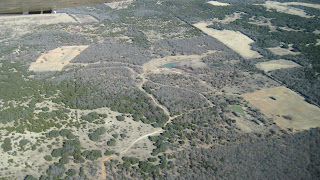 It had been some time since I last flew in small private aircraft, and the experience is invigorating. You become a bird.
Posted by Charlie Johnson at 7:11 AM 6 comments: