There is a stunning Protestant church in Trier, where we have spent the last several days, that was constructed upon the very edifice first consecrated to the Roman emperor. The power of the Gospel to convert that which is secular into something sacred always astonishes. Indeed, this church is yet another gorgeous structure of old Christendom, almost as high as it is long, and stands, as do so many in this country, as a testimony to Christ's transformative genius.

But, the inspirational story, like most human stories, has a dark side.

In 1930's and '40's, this congregation was deeply complicit in the Nazi regime of terror. Its pastors cooperated with the oppressive authorities, like most ministers of the Nazi era. In fact, there are photographs of young boys being confirmed in their Nazi youth uniforms. Not only did this church refuse band together with the several other courageous "Confessing Churches" (made famous by Bonhoeffer's witness) of the region to resist the cruel order, it ostricized those members of its own congregation who were critical of Hitler and his policies. Of particular horror was the stance of the church toward the Jewish people of their community.

The Allied bombing of April of 1944 severely damaged the church. The ornate wood chancel and altar were destroyed by fire, as was the organ. Everything inside the church was demolished. The only thing remaining were the rock walls erected by the Romans so long ago, perhaps a reminder that moral lessons learned by one epoch have a way of being strangely forgotten by successive ones.

When the fire swept through the church, townspeople say that the pipes of the enormous organ began mysteriously playing by themselves. As the local lore has it, the windstorm created by the destruction forced air through the pipes, creating a haunting dirge that could be heard throughout the city.

A divine recital of judgment upon the cowardice and betrayal of a Christian people who forgot who they were.
Posted by Charlie Johnson at 1:17 AM 4 comments:

We have made our way from Frankfurt over to Rothenburg ob der Tauber, a Disney-charming, remarkably preserved medieval village dating to the 12th century. It is ringed by the picturesque Tauber River, which we can clearly see from our hotel balcony, and nestled quaintly among the surrounding hills.

When the Thirty Years War of the 17th century devestated most of Germany, this place was fortunately spared, and, thereby, frozen in time instead of updated and modernized with successive waves of cultural development. Its cottages and cobblestones make an excellent setting for postcard-perfect German scenery.

But, I was shaken from this pastoral reverie with today's visit to a museum of medieval criminal justice. The museum houses one of the most extensive collection of medieval torture implements in the world. It's one thing to see this stuff in movies, quite another to look at it right in front of you. The cruelest and crudest devices for wresting confessions from suspects were on display for perfectly cultured and refined people like us to view: racks, ropes, cranks, pulleys, pinchers, gallows, stocks, belts, balls, chains. It was a graphic presentation of human barbarism, an ample justification for why historians refer to those ages in our human story as "dark." As we were all wincing and grimmacing, we were thinking: thank God we don't practice justice so primitively today.

Then, I got back to my hotel room and turned on CNN to see, once again, the now-famous cell phone footage of Saddam Hussein's final seconds, and realized that the continuum between what happened then and what happens now is not all that long, that our contemporary moral superiority isn't justified after all, and that eras like medieval and modern and post-modern may be different with regard to what we drive or how we dress, but not so different in how perfectly civilized people still insist on killing people who kill people-- even murdurous beasts like Saddam-- to show that killing people is wrong.
Posted by Charlie Johnson at 3:57 PM 8 comments: 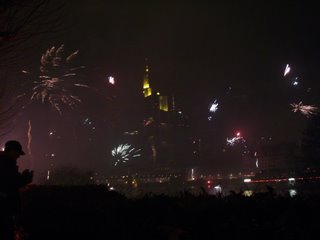 Last night's New Year's Eve celebration here in Frankfurt was a grand-scale spectacle unlike anything I've ever seen.

Jana, Cliff and I made our way around 8:00 p.m. to Sachsenhausen, the old part of the city south of downtown, across the Rhine. Walking to our restaurant, I was scared silly step after step by the explosions of firecrackers nearby.

The tradition here is to celebrate entrepreneurially: each brings his or her own fireworks to ignite on New Year's Eve. Forget controlled, orderly, safe, secure scheduled displays that are carefully choreographed to go off a few minutes before midnight. Rather, think merry mayhem.

After a wonderful Thai supper (the new world order means, among other things, that you can now eat anything anywhere) and a couple of lively German pubs, where we joined in songs we did not know in a language we do not speak, we walked to the riverbank a couple of blocks away. Despite a steady rain, tens of thousands were already lining the Rhine by the time we got there. We managed to stake out a good spot overlooking the river and facing the impressive Frankfurt skyline to the northwest, right across from St. Leonard's Church, one of the oldest protestant churches in the city, where the people of God confirmed Goethe's faith in the 18th century, and where one of the only existing stained-glass windows survived the Allied bombing in '43.

No sooner had we got settled into our vantage point than the show began. Slow at first, but then more and more, minute after minute, myriads of bottle rockets and Roman candles began to detonate all around us and up and down the river for over a mile, wave after colorful wave of fiery sprays in the chilly and wet night sky, a constant barrage of fireworks, made doubly stunning not only by their Rhine reflection dancing on the water's surface but also by the iridescent skyline framing them, and persisting with increasing dazzling fervor for well over an hour, until the final climax minutes before midnight generated yet a new level of ferociously streaming color and fire that culminated in a magnificent pyrotechnic piece de resistance just as the clock struck midnight and St. Leonard's bells pealed for a full half hour.

It was a happy apocalypse, surreal with the smoke and sulfur hanging over the river. Blessedly, we watched from the elevated sidewalk on the bank. The randomness of it all added to the adventure. Scared us at first (well, Jana and me, but not Cliff), but we soon got swept into the delight and magic of it all. The entire thing was splendid, glorious, with the impressive Frankfurt skyline as the backdrop. Shortly after midnight, it began to rain, which only seemed to lubricate the entire affair into a more adamant revelry. As we were climbing in a cab around 1:00 a.m., I turned to see a young policeman chugging down a beer... which bizarre sight I took as a sign that the party was over for us, and that if we wanted to live the 2007 whose advent we had just celebrated, we had better get to the safety and sleep of our hotel.

I got to see the July 4 fireworks on the Mall in Washington D.C. in 1977, but last night was even more amazing. People were mostly well-behaved, a miracle in itself. Everyone's personal participation in it heightened the sensation of the event, like some kind of ancient communal festival that bound all these complete strangers together. Lots of dancing, singing, hugging-- my kind of party.
Posted by Charlie Johnson at 4:45 PM 305 comments: